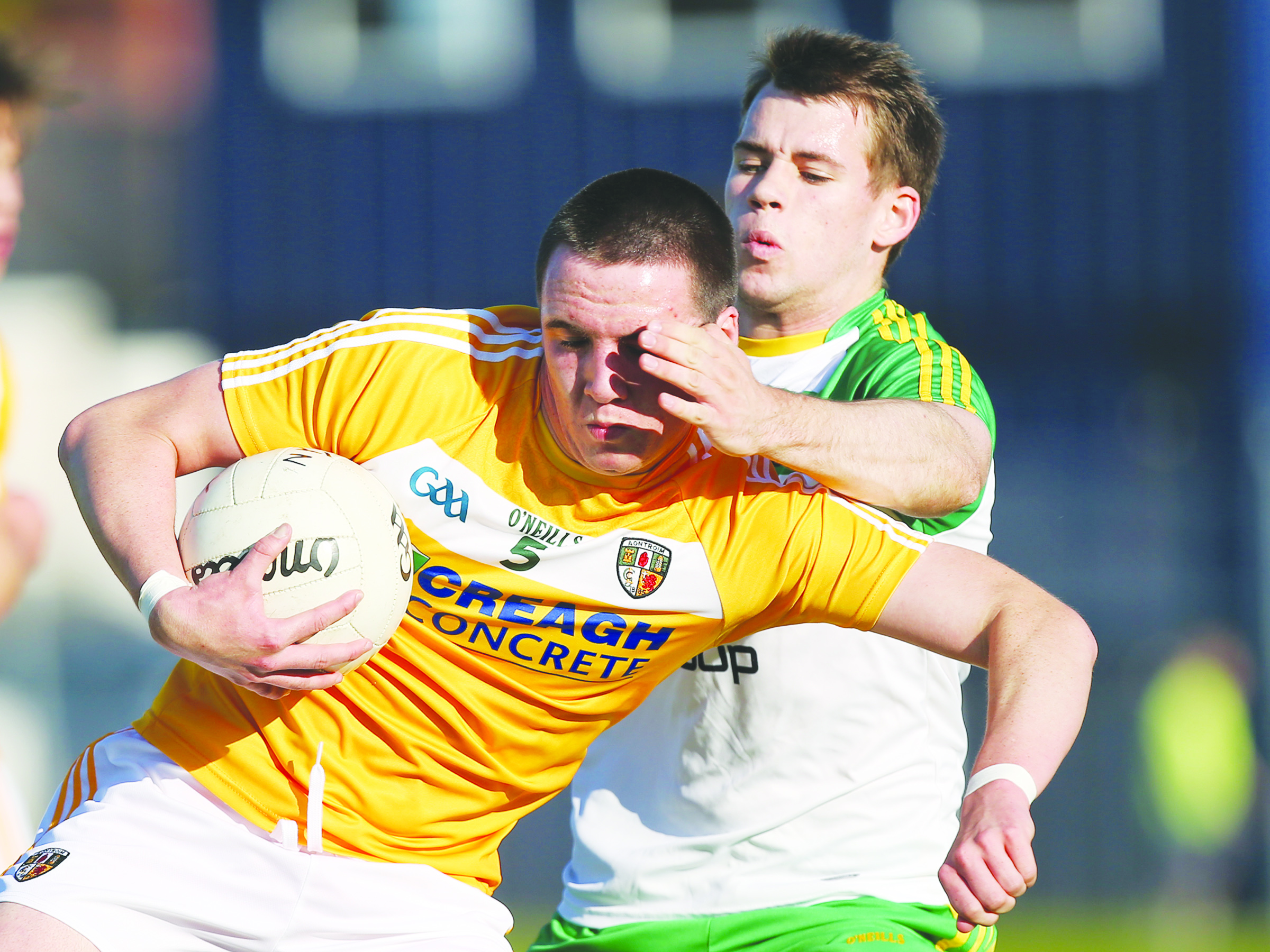 Patrick Finnegan, pictured in action against Donegal's Aidan McLaughlin in the Ulster MFC earlier this year, will be one of the key players for St Brigid’s as they bid to defeat Dunloy in the Minor ‘A’ Championship final at Corrigan Park on Sunday

WITH the Minor Hurling Championship trophy already in the cabinet, Dunloy bid to claim the double when they take on St Brigid’s in the football equivalent at Corrigan Park on Sunday.

The game is the curtain-raiser for the senior decider between St Gall’s and Cargin and could be very bit as intriguing as the main event.

Both sides have claimed notable victories this season with St Brigid’s beating last year’s champions, St Enda’s in the first round while Dunloy defeated last year’s beaten finalists and this year’s Division One winners, Creggan in their opening game.

However, the semi-finals were at the end of August and St Brigid’s manager Lorcan McGarvey is hoping his players can fulfil their potential in the final.

“Preparations have been going well. The gap between our last Championship outing and the final was not of our making,” said McGarvey.

“It has given us some time to get the boys prepared and I couldn’t have asked for more from them in training.

“They apply themselves well and we just hope that what they do on the training pitch translates into a performance on the day.

“You can’t ease yourself into a Championship game. You have to get it right from the throw-in.”

McGarvey is delighted with how his side have progressed this season but he is adamant that the Cuchullains are favourites having defeated St Brigid’s 4-9 to 1-9 in the first league game of the season.

“To get past St Enda’s in the first game was obviously a big plus,” said McGarvey.

“Rossa are a team that will always be hard to beat.

“They have incredibly talented footballers and great coaches.

“Playing them, we had a pretty tough first half but we lifted our game in the second half to go through.

“The interesting thing is that Dunloy are something of an unknown quantity to us.

“We see that as a brilliant challenge. They beat us earlier in the year but the way the underage structure is in Antrim, we wouldn’t have played them at U12 or U14 level.”

He added: “They are a very well-drilled side and they will fancy their chances.

“They will be going into the game and a lot of their players will already have a Minor Hurling Championship success under their belts.

“We are aware of the uphill battle we have in front of us.

“We have been underdogs on a number of occasions and, hopefully, we can raise our game on Sunday.”

St Brigid’s won the Antrim U16 championship back in 2014, but lost out to Burren in the final of the Paul McGirr tournament later that year. The Finnegan brothers, Patrick and Joe were key players in that side and, having both represented Antrim minors this season, will need to be at their influential best if St Brigid’s are to prevail on Sunday.

Dunloy didn’t have any representation on the county minor panel this year but the likes of Conal Doherty Cunning, Keelan Molloy, Eoin O’Neill and Conor Kinsella played for the Antrim minor hurlers and the quartet are set to feature against St Brigid’s on Sunday.

The league meeting between the sides went in favour of Dunloy but St Brigid’s have shown enough in the weeks and months since to suggest that an upset could be on the cards.