Tennyson raring to go ahead of British title clash 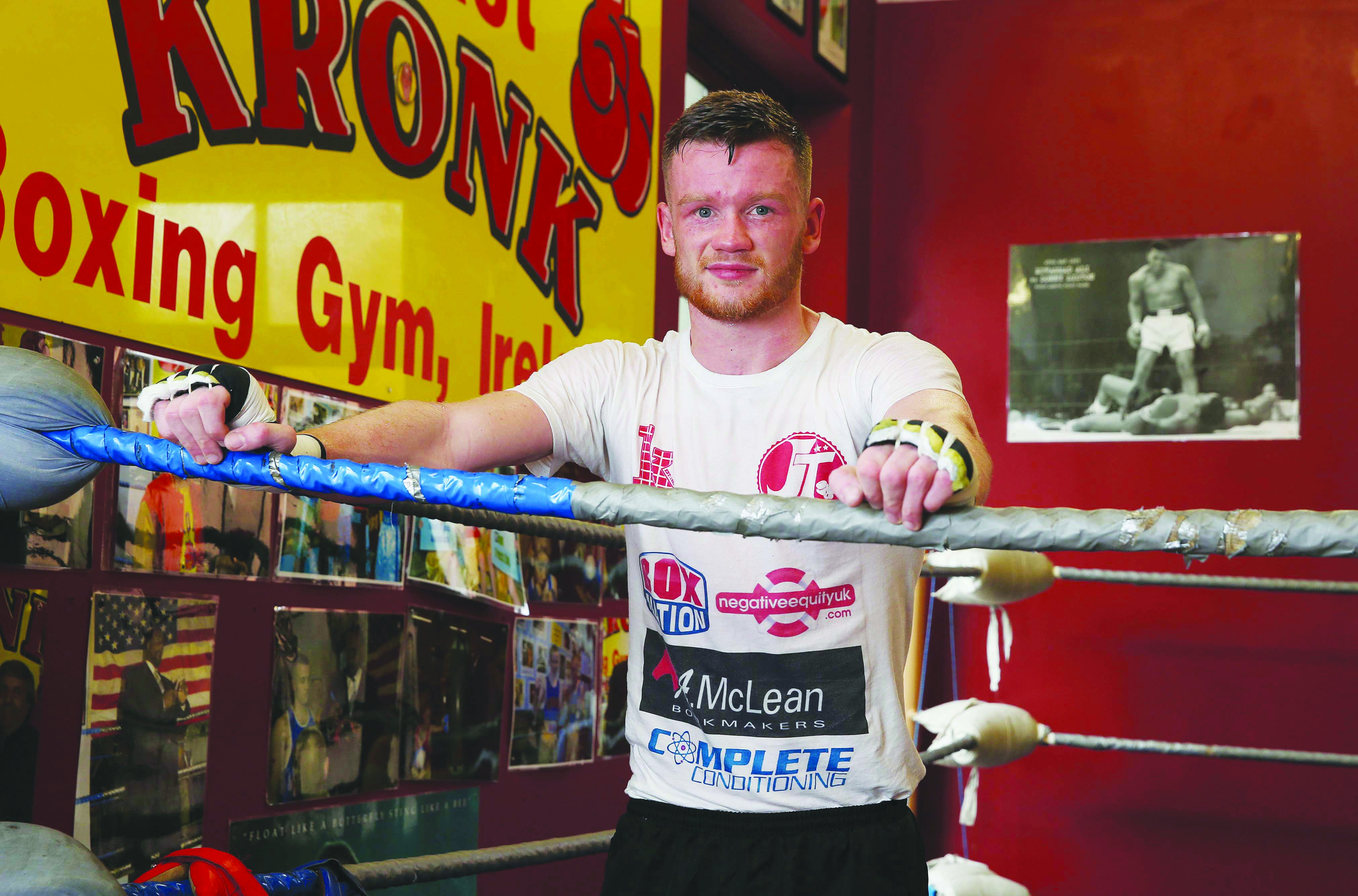 HAVING won Irish and Celtic titles, the next logical step for James Tennyson is to secure the British featherweight belt and he gets the chance to do just that when challenging Ryan Walsh at the Copper Box in London on Saturday night (approx 8pm).
‘The Assassin’ has a professional record of 16-1 despite being just 22 years-old, but the Poleglass man has shown plenty in that time to suggest the Lonsdale Belt should not be the limit of his ambitions.
That is not to say Saturday is going to be a formality, far from it.
Walsh, a 29 year-old with a record of 20-1-1 claimed the title with a split decision win over Samir Mouneimne in September and defended it with a fifth round stoppage win over Darren Traynor – who Tennyson was originally due to face in a final eliminator – in January.
The Norfolk man’s only defeat came at the hands of Lee Selby who has since gone on to claim world honours, so has bags of experience and is sure to push Tennyson to the limit on Saturday.
But the West Belfast man is ready and could not ask for better preparation throughout this camp, sparring against some of boxing’s leading lights and says he is fully confident of victory.
“I have done all of the hard work,” he insists.
“From my last fight (first round KO against Antonio Horvatic), I didn’t take much of a break. I was straight back into it, sparring and helping out a few guys along the way.
“I’m more than ready now, so I would be more than confident of jumping in now.”
Those ‘few guys’ were none other than Carl Frampton who enlisted the help of Tennyson in the final stages of his camp ahead of the unification bout with Scott Quigg and Josh Warrington who defeated Hisashi Amagasa two weeks ago.
Ronnie Clark – who drew with Walsh in 2012 - was also a sparring partner as-well-as stablemates, James Fryers and Paul Hyland Jnr. In all, Tennyson says he completed around 150 rounds of sparring ahead of the weekend and was able to taper off a little earlier due to his excellent preparation.
“When I got the call from Carl Frampton, there was no better way to kick-start my training camp than with tough sparring like that,” he agreed.
“It was the end of his camp and he was flying.
“I got a lot of confidence from that camp and had great feedback from them. They were actually saying they should have had me over earlier, so I was really happy about that and it would be great to help them out again.”
It is a measure of how highly Tennyson is rated that promoter, Frank Warren has signed him to a promotional deal and big names are employing his services for their big nights, but this week it is all about the West Belfast man and his own title shot.
Following his win over Kris Hughes for the Celtic strap back in March 2015, he has had to play the waiting game for his shot, keeping busy with four stoppage wins but it has all been leading to this point.
“From I was made mandatory, all of my focus has been on this fight,” he says.
“I have worked endlessly for this, so I’m confident I will be coming back with the belt.
“I have taken everything that has come my way since then (Hughes fight). Mark (Dunlop, manager) has kept me busy while I waited for my shot, so I’m more than ready.
“I’m excited for it. I’m just taking this as another fight. There will be a big crowd, but I’m bring a good crowd too.”
As-well-as a good support that will include fans of Jamie Conlan who also boxes on the bill, Tennyson will enjoy a height and reach advantage on the night and that could prove to be crucial.
He acknowledges that Walsh will be a tough nut to crack, but says the plan is set to ensure the prestigious Lonsdale Belt returns across the Irish Sea.
“He is a good boxer, has a good style and doesn’t waste his punches,” acknowledges the former St Paul’s amateur.
“He picks his shot nicely, but we have watched him and have a gameplan set out for him and we are in no doubt we will come back with the British title.
“I think I am head and shoulders bigger than him and that is going to work to my advantage. I’m confident I have everything going for me.
“The Kris Hughes fight was so frustrating, but I expect Ryan Walsh to be much different. He’s not going to give his British title away without a fight. I’m a expecting a tough night, but a victory at the end of it.”