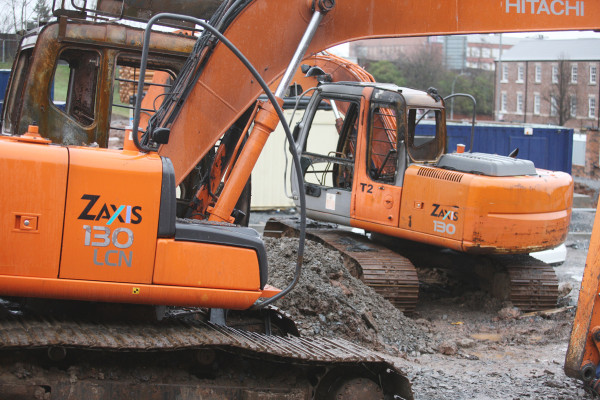 Dissident republican extortionists were behind an arson attack on a Belfast building site that saw two diggers burned out.

A security guard held captive during the attack was left badly shaken after he was ordered into a shed while a gang torched two large earthmovers. 26 homes are being built on the site of the former North Queen Street barracks in a part of the city suffering from an acute shortage of social housing.

Monday night’s incident was the second arson attack on the same building site in a month. On February 12 another digger was set on fire by criminals intent on putting the squeeze on contractors.

The latest burnings follow a Belfast Media Group investigation that revealed five gangs claiming republican credentials are attempting to extort money from another social housing development in North Belfast – this one at the former Girdwood barracks site at the rear of the Crumlin Road Prison visitor attraction.

The current upsurge in dissident republican extortion activity can be traced back to February 2013 when work was halted on a children’s play park in the New Lodge after a gang tried to take over security on the site. This caused the builders to withdraw for a period before a publicity campaign led by the local community saw the gang withdraw their demands.

The dissident republican micro-groups Óglaigh na hÉireann and Action Against Drugs are two of the gangs most actively involved in the burgeoning protection racket that’s plaguing the North Belfast construction industry.

This morning local residents and community representatives gathered for a protest at the scene of the latest attack. Local MLA Gerry Kelly described the gang responsible as “cowards, thieves and bullies”.

“This latest attack is another attempt to extort those building homes for local families in need and is quite frankly despicable,” he said. “For these criminal gangs to stoop so low as to prey on deprived communities crying out for homes and facilities and at the same time threaten and intimidate workers to line their own pockets shows them up for exactly what they are – cowards, thieves and bullies.

Detective Sergeant Kenneth Leckey appealed for anyone who may have evidence about the attack to contact police.

"I would appeal to anyone who may have noticed any suspicious activity in the area or who has information about this incident to contact CID at Musgrave Police Station on the non-emergency number 101.”

Apex Housing, the association behind the development, declined to comment.