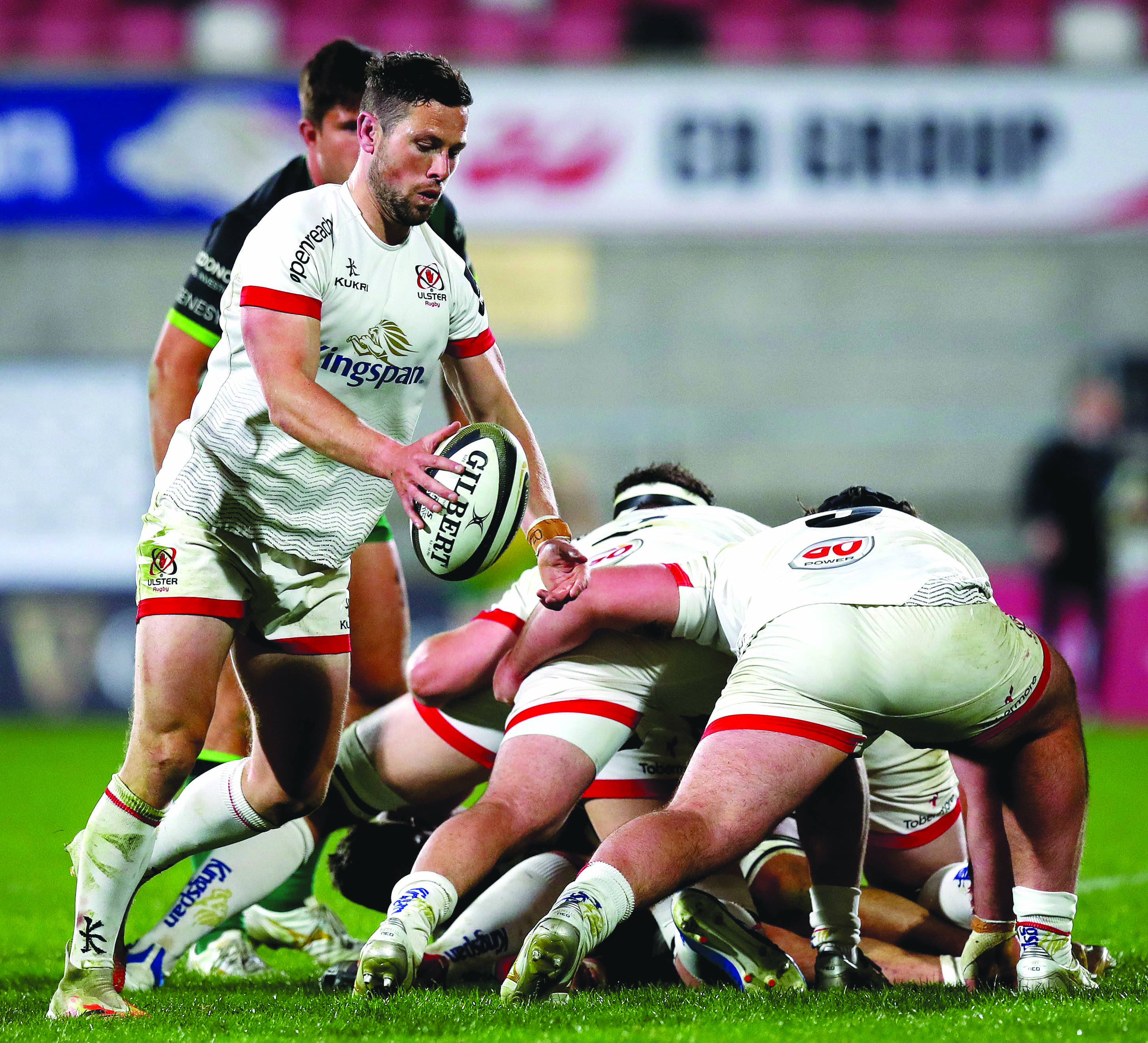 John Cooney is back in for Saturday’s game against Leinster having recovered from a hamstring injury, but Iain Henderson will miss out with the same injury INPHO

FIVE long weeks have passed since Ulster tasted their first defeat of the season when falling to Connect at the Aviva Stadium, but they get the chance to put that performance in the rear view when they return Dublin on Saturday evening for the ultimate test against Leinster at the RDS.

Ulster’s record at the South Dublin venue is not one that makes for pleasant reading as the 2012/13 season was the last time they triumphed away from home.

Indeed, the last six meetings between the clubs have all went the way of Leinster regardless of venue and Leo Cullen’s side sit on top of the United Rugby Championship standings with five wins from five ahead to Saturday’s latest edition.

There is no doubt that Ulster will have to improve dramatically from that disappointing defeat against Connacht last month to get back on track, but that is easier said than done against a side that has dominated domestically over the years and whose start to the season suggests there will be no letting up this term.

“You have got to match them in your intensity, both physically and in the speed of your movement around the park,” said Ulster Head Coach, Dan McFarland, earlier this week.

“We are not a team that will be able to overpower them with the brute force of our forwards up front like La Rochelle.

“We are going to have to find a different way and have a particular way of playing that does involve winning gain lines, does involve quick ball, does involve movement, so we have to get that right.

“Having said that, they’re a team that is extremely adept at slowing those things down and we have to win that battle.

“In addition, we have to be smart the way we play in the middle third of the field. Their defence is excellent and does force you into errors, so we’ve got to limit those or be very careful how we play the territory around the field. Either way, it’s an extremely big challenge and one wen are really looking forward to.”

McFarland doesn’t believe that there is any kind of an RDS hoodoo and puts their run of defeats in Dublin down to Leinster just being the better team in each meeting.

Still, the hosts are not unbeatable on their own turf and have fell to defeat, so for Ulster, it is about ignoring the surroundings and just focussing on the 80 minutes ahead.

“They have lost there to Ospreys and Connacht in the recent past. The RDS is a good stadium but to win games, it doesn’t matter what the stadium is like - you’ve got to be a good team.”

Iain Henderson will miss out this week as a hamstring injury picked up in the warm-up before Ireland’s game against Argentina last weekend means he going the list of absentees that could leave him in a race against time to be ready for next month’s European games.

There is better news with John Cooney back in having recovered from his own hamstring issues and is selected at scrum-half alongside out-half, Billy Burns. Craig Gilroy will be one appearance away from the ‘200’ milestone when he takes the field on the right wing on Saturday alongside Mike Lowry at full-back. Ethan McIlroy completes the back three on the left wing. Stuart McCloskey and James Hume both return from Ireland camp to make up the midfield partnership.

Alan O’Connor will skipper the Ulster side and will partner Sam Carter in the second row. Andrew Warwick and Marty Moore will pack down either side of Rob Herring, who has returned from the Autumn Nations Series with Ireland, and starts at hooker.

Nick Timoney also returns from international duties to start at openside flanker with Greg Jones at blindside and David McCann at Number Eight.

“We didn’t put anything near what we are capable of or wanted to put on the pitch down at The Aviva in that game against Connacht,” McFarland reflected.

“Although I thought they played really well, myself and everybody here was really disappointed with the way we performed in that game.

“There is an acceptance it wasn’t good enough. I don’t know whether in the aftermath of that I drew too many generalisations. I go away and settle down a little bit - I’m quite an emotional guy.

“But we take it on the chin and that’s what happens in sport. We aren’t the only team in the last couple of months who lost games they thought they could have won and that the beauty of sport - you’ve got to be able to rise from those defeats and turn it around.

“We have a huge opportunity this weekend to put something on the pitch that is closer to what we aspire to.”

Saturday’s game will be the first of a 10-game run between domestic and European competition with four of them against Irish opposition including Leinster twice.

The trajectory of the season will likely hinge on what happens between now and the end of January and that is not lost on McFarland or his players.

“It’s a block of 10 games where we play seven different teams and a hugely challenging block,” he accepts.

“Having Leinster twice, Munster, Connacht and those four big European games as-well-as the Ospreys and Scarlets to finish off is a huge challenge. It’s probably the main course of our season and will go a long way to determining what the dessert looks like.”