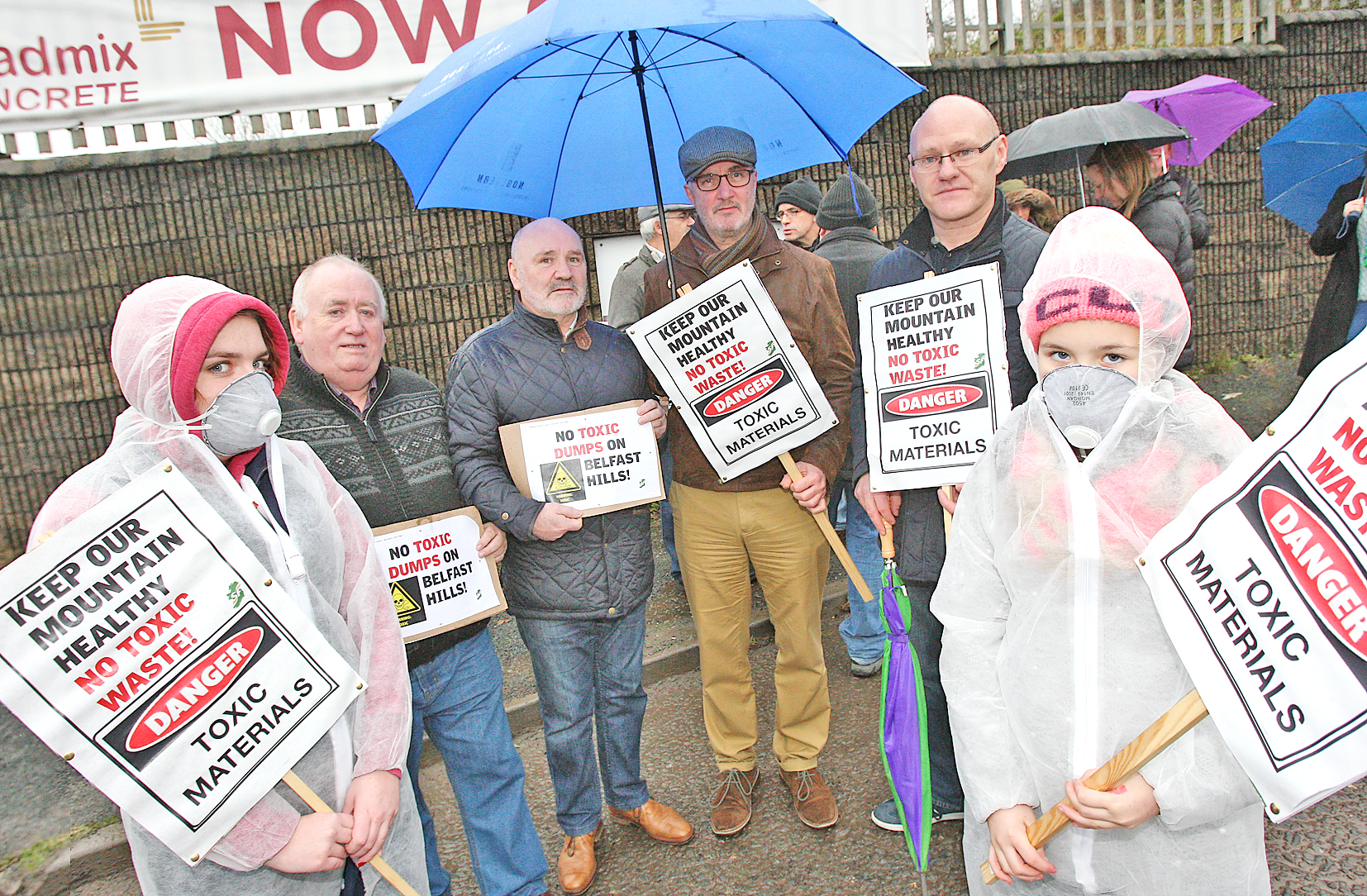 Protesting last month against the proposed quarry on the Black Mountain

COMMUNITIES living close to the Black Mountain are rejoicing after plans for a toxic asbestos dump on the hills overlooking Belfast were rejected on Tuesday night.

Belfast City Council’s Planning Committee voted against the application at the meeting with eight councillors opposing the plans, two in favour and one abstention.

The application had legally complied with procedure and the recommendation was to approve, however, objections from a number of groups, including the Northern Ireland Tourist Board, convinced the majority of councillors to vote down the plans.

The welcome news brings an end to the three-year fight against the proposal by Whitemountain Quarries who were seeking to store and treat the potentially deadly material at their Upper Springfield Road landfill site.

When we first revealed the story in January 2013, alarm reverberated through the community.

West Belfast MP Paul Maskey spearheaded the campaign to stop the plans and garnered support from the community, environmentalists and other political parties.

This week Mr Maskey is breathing a sigh of relief with the news that the plans will not proceed.

“This is a great result for the people of Belfast and for the Belfast hills,” he said. “It proves that hard work, determination and organising the facts for a campaign to oppose the site has paid off. It’s been three years coming but the result is better late than never.

“I want to commend Belfast City Council for having the vision to oppose the plans, the Northern Ireland Tourist Board who officially objected to the plans, the local residents, environmentalists and lobbyists who took time to write to the planners and the applicant and also I want to commend the Andersonstown News for consistently highlighting the issue for three years.

“Everyone is delighted with this news and it’s a great result for the Enright family whose late father Terry played such a pivotal role in making the hills a place to be cherished. It’s a massive result for the entire district and it’s the right result.”

Environmentalist Gerard Daye was one of those who had presented his objections to the Planning Committee. He too is celebrating the news.

“This means we will not have a toxic timebomb literally hanging over the West of the city,” he said. “I’m glad the hard work has paid off and the plans have been scrapped but we will continue to be alert for any similar applications that are attempted down the line on the beautiful Belfast hills.”

The SDLP also voiced their satisfaction with the decision.

“Terry Enright will be smiling down on West Belfast today, as a result of this decision, this tireless environmental campaigner helped to preserve the Belfast Hills, the Divis and the Black Mountain,” said Alex Attwood MLA.

“I have long held a view that old quarries have much better functions than being used as waste treatment facilities. Our ambition in West Belfast must be to create a heritage and tourism jewel similar to the Eden Project Cornwall.”