Wicklow will be a step up in class warns Murray 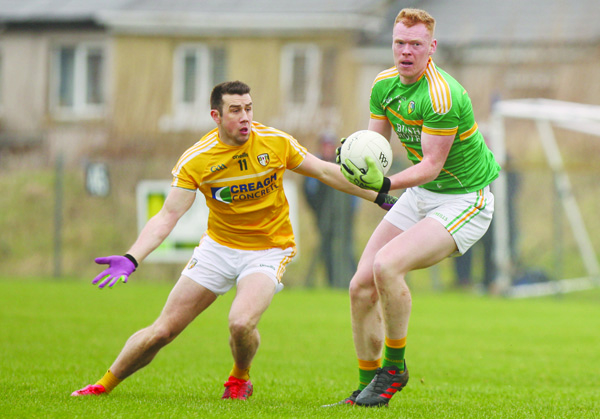 Antrim’s Conor Murray, pictured in action against Leitrim’s Colm Moreton on the opening day of league action, believes Sunday’s round three game against Wicklow will be the toughest game the Saffrons have faced to date in their Division Four campaign

ONE way or another, Conor Murray was going to end up on the winning team last Sunday when Antrim clashed with Waterford at Carriganore.

Antrim’s full-forward bagged a crucial 1-1 while his namesake scored a point for the Déise in their eight-point loss to the Saffrons.

Lenny Harbinson’s men go into this weekend’s third round of fixtures seeking a third successive win, but Murray has warned that Antrim’s games will only get tougher as they prepare to host Wicklow at Corrigan Park on Sunday (throw-in 2pm).

“Wicklow got beat by London and they drew their first game against Waterford - they really have to win this weekend if they are to have any chance of getting out of Division Four,” said Murray.

“They will come up this weekend all guns blazing – they have nothing to lose. This will be our toughest game yet. Then we have to go to Ruislip in two weeks’ time.

“The next two weeks will be difficult before we can even look at the likes of Laois, Carlow and Limerick.

“You know what you are going to get with Wicklow. You won’t get much space, they drop plenty of men back behind the ball and they have dangerous forwards. At least they are coming to Belfast and it is not down in Aughrim.”

Murray also suggested that Antrim’s eight-point win over Waterford last Sunday wasn’t as comfortable as the scoreline suggested and said that his second half goal, coupled with a first half major from younger sibling Ryan, helped the Saffrons keep the hosts at arms’ length.

“I think we got our goals at the right time,” said Murray.

“Ryan got his goal midway through the first half and I got mine midway through the second half, just when the game was in the melting pot. That gave us a bit of a breather. That goal moved us four or five ahead and we were able to close out the game.

“It’s four and a half hours down to Waterford so to get the two points made the journey back up the road that bit sweeter.”

After two rounds of the Allianz National Football League, Antrim are top of the Division Four standings, but fellow promotion hopefuls, Laois and Carlow have also won their first two games.

When the Saffrons last gained promotion in 2016, they were unbeaten before losing the Division Four final to Louth in Croke Park. Ideally, Antrim would like to keep their fate in their own hands again this time around.

“We won six in a row in 2016 then we drew with Louth in Corrigan Park in a dead-rubber – we already knew we were going to be playing them in the Division Four final,” added Murray.

“To be honest, if we don’t get promoted from Division Four, it will be a huge disappointment to the players and to the fans.

“Trying to get out of Division Four is the main aim of the season. Two of our last three games are away to Laois and away to Limerick and we have Carlow at home.

“We want to try and get as many points on the board before those games. Hopefully it will be up to us to dictate who is in the final. You don’t want to have to worry about other results or needing to get a win in the Gaelic Grounds on the last day.”

Antrim boss Lenny Harbinson made a number of positional switches last weekend with Murray pushing into full-forward while Paddy McAleer and Paddy McBride played in the half-forward line having played most of 2017 in the half-back line.

The unavailability of CJ McGourty (flu) and Colum Duffin (injured) may have forced their hand, but Murray added that Antrim are trying to play a more attacking brand of football this season.

“Kobo (Kevin O’Boyle) wasn’t really fit at any stage last year and (Mark) Sweeney is back from Dublin,” added the Lámh Dhearg clubman.

“Paddy McBride would normally play half-forward for St John’s. Against Waterford, Colum Duffin was injured and CJ (McGourty) had the flu so he didn’t travel.

“I think we still have to be defensive to try and stop conceding goals. I think we are starting to create more space up front.

“Other teams we are playing are dropping more men back or playing another sweeper and Lenny (Harbinson) is trying to get us to move those men out of position to create space. We are more cautious about the runs we are making. We have only played two games in the league. We will be judged at the end of the league and in the summer time, but at the minute things are going well.”

Duffin remains out with a cracked jaw while defender Conor Hamill is also sidelined. Antrim will monitor McGourty’s recovery this week before making a decision regarding his participation.

Wicklow boss John Evans will know his side must take something from Sunday’s encounter if they are to avoid another season in the basement division, but their opening two games have been hugely disappointing.

That said, the Garden County gave Antrim their fill when the sides last met in Aughrim in 2016 with the Saffrons sealing a four-point win to secure promotion. Yet, Chris Kerr was forced to make an excellent point-blank save to deny Darren Hayden a late equalising goal before Paddy McBride hit the insurance point.

With Kevin Murphy and James Stafford making a formidable centre-field pairing, Wicklow aren’t to be taken lightly and, in Seanie Furlong, they have a free-taker capable of punishing Antrim’s indiscretions.

However, the form of the opening two rounds suggests that this sound be another win for Harbinson’s men, albeit by a slimmer margin than in their earlier games against Leitrim and Waterford.