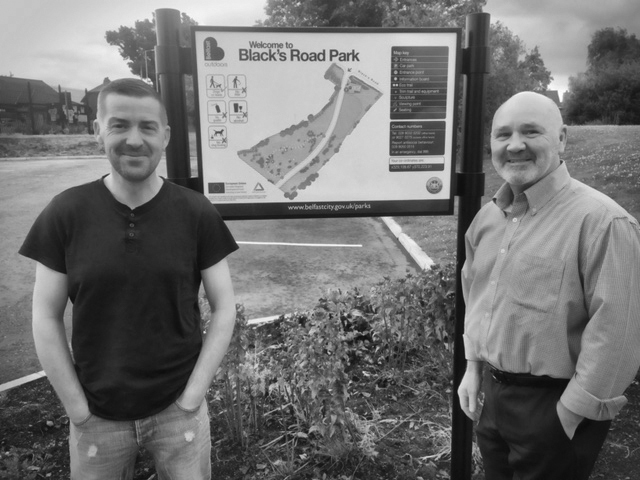 Cllr Matt Garrett and former South Belfast MLA Alex Maskey at the formerly derelict Blacks Road site where work has begun, below, on a state-of-the-art play park and sensory/therapy garden

WORK has started on a new state-of-the-art children’s play park and sensory and therapy garden on derelict land the Blacks Road.

The site had up to recently been derelict wasteland which attracted a lot of anti-social activity. Speaking to the South Belfast News, local Sinn Féin Councillor Matt Garrett said: “When I took up my position in Council in 2010 I made this site one of my and Sinn Féin's priorities in the constituency for positive regeneration and a resource for the entire community.

“It has been a long, difficult process. The first step was to ensure the Council legally transferred the site into their ownership, in 2010 the site sat within Lisburn council boundaries and was in the ownership of the then Department for Environment and Department for Regional Development. Lisburn Council were aware that through boundaries changing this area would become part of Belfast Council boundaries.

“I formally proposed in Council that Belfast Council transfer this site into their ownership from the government departments above and this happened.”

Mr Garrett continued: “Following this, £315k Peace III Funding allowed the site to be regenerated into a community park area. This was delivered by Groundworks and I worked alongside them to facilitate the delivery of this through community consultation and statutory stakeholder engagement.

“Following this and when Council took ownership we ensured a further £230k was ring-fenced to create a play park. This is what is currently under construction. Alongside this I engaged with the Department for Communities to get a further £130k invested to create a sensory and therapy garden, this work will begin and be completed alongside the play park.”

Cllr Garrett has engaged with youth providers in a bid to run positive projects in the park upon its completion and they have also been working with a local group of residents to create a Friends of Blacks Road park group who will also work to ensure the park is used for positive purposes and programmes.

Cllr Garrett continued: “I will also continue to work with Council to ensure the park is maintained to the highest standards and it will grow to become a much loved asset for all the people of Blacks Road and surrounding areas. It's been a long hard road to get the site to this point but it's been worth every minute to see its development over the last six years.

“It’s great news for everyone and will be enjoyed upon its completion in April of this year.”