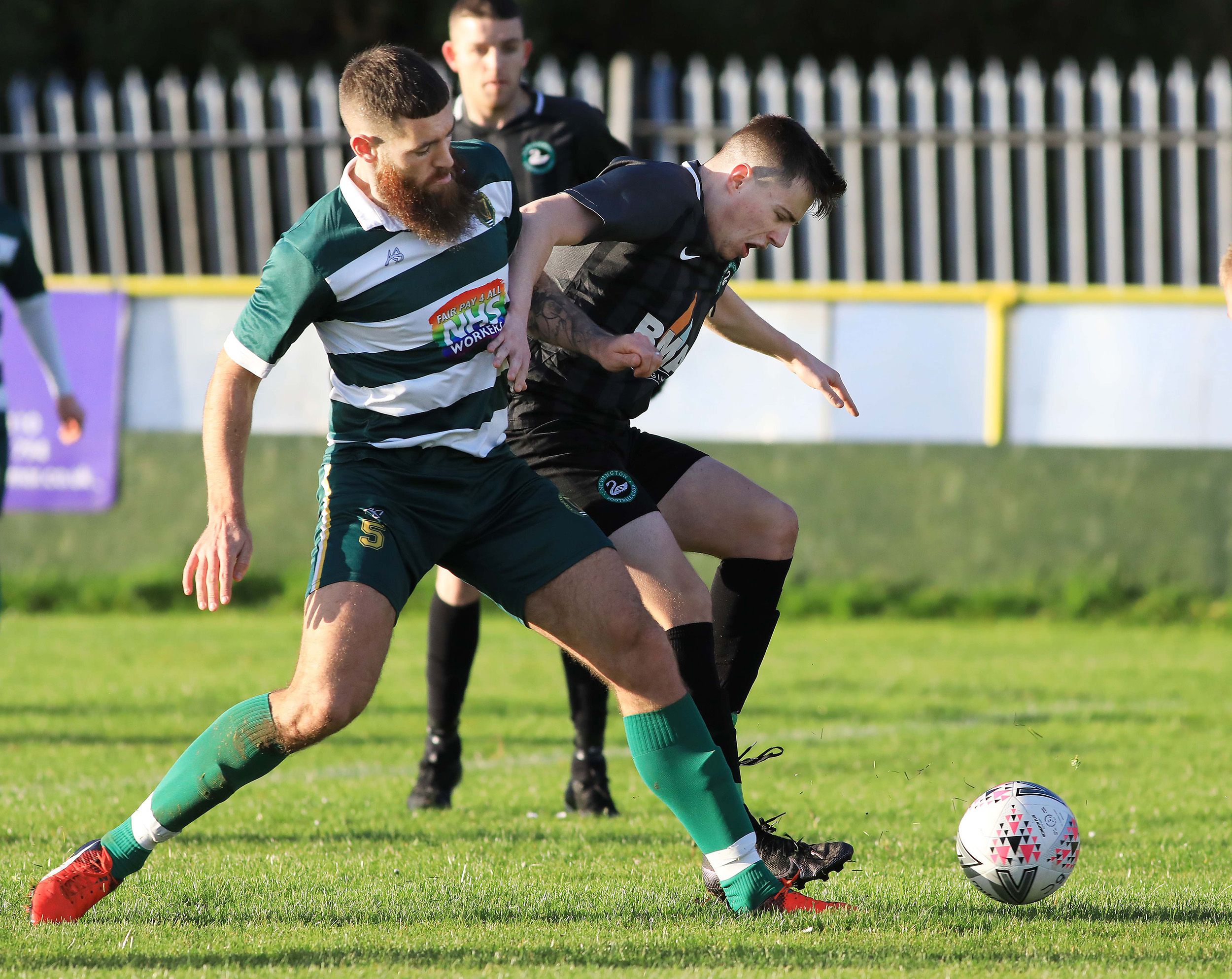 Belfast Celtic will be without captain Mark Clarke, pictured in action against Newington, for next Tuesday’s Irish Cup clash against Carrick Rangers while Padraig McParland and Brendan Shannon are also set to miss out

BELFAST Celtic face an uphill battle to progress to the second round of the revamped Irish Cup as they’ll go into Tuesday’s clash against Carrick Rangers without the services of three key players.

Skipper Mark Clarke will miss the first round tie against his former club while strikers Padraig McParland and Brendan Shannon are also unavailable.

Manager Stephen McAlorum knows his side are huge underdogs going into the game at Taylors Avenue (7.45pm kick-off) but he insists he still expects his side to give a good account of themselves.

“We’ve a few players out. Big Mark Clarke is out at the minute and so is Padraig McParland – two starters.

“They’ve a few ongoing injuries and they’ll not make it. They are huge losses for us. Brendan Shannon is another who won’t make the game.

“It gives a few others opportunities to come in, the likes of Andy McGowan.

“He has stepped up from the reserves last year and he has been brilliant since he has come in.

“He is full of energy and he’ll be a good addition to the squad going forward.

“When you lose a few players, it gives others the chance to stake a claim in the team.”

McAlorum, a two-time winner of the Irish Cup with Glentoran, had previously expressed his reservations about his side taking part in the competition.

The Irish Cup has already been overshadowed by the withdrawal of six teams, all from the Championship, in an ongoing dispute over the non-elite status of teams from the second and third tier of local football.

The Championship, along with the Premier Intermediate League, cancelled their season having failed to complete a single game while other regional intermediate and amateur leagues were also axed.

The scaled-down 32-team competition was due to commence at the start of January, but ongoing Covid-19 restrictions meant the Irish Cup was postponed until the end of April.

Queen’s University became the first club to pull out of the competition at the beginning of March citing a “lack of sufficient preparation” and they were soon followed by Championship rivals Newry City, Institute, H&W Welders, Ards and Dundela.

Belfast Celtic and other teams from outside the Irish Premiership have been granted elite status while they remain involved in the competition, but McAlorum said he understands why the six Championship teams have withdrawn from the Irish Cup.

“It is a tough one and I can understand both sides – the six clubs have valid reasons for pulling out,” said McAlorum.

“My opinion hasn’t changed. I still think it isn’t a level playing field for us and for us to be playing a game of this magnitude.

“Ultimately, it was up to the players and I’ve no problem coming in to help them and doing as much as possible to ensure they have the best chance possible to go through.

“We do want to go through to the next round, but it is a very tough ask.

“Our boys wanted to play the game and we made the decision as a club that we’ll do everything we can do get them ready.”

Belfast Celtic were permitted to resume collective training at the end of March and McAlorum is happy with the fitness levels of his players going into next week’s clash with Carrick.

The West Belfast outfit only played two league games last season, the last of which was in mid-October when they secured a 7-0 win at Ballymoney United, one week after drawing with Chimney Corner in an eight-goal thriller at Glen Road Heights.

Their opponents may be second-from bottom in the Irish Premiership standings, but McAlorum knows his side will be up against it on Tuesday night.

“We are back training and things are going as good as they can be,” added the Belfast Celtic manager.

“We’ve been back for the last three weeks or so and it was good to get the lads back out on the pitch and the players are glad to be back. There is a good spirit in the squad at the minute.

“You can do all the individual stuff you want, but you can’t beat getting everyone together on the pitch, that buzz of training.

“The majority of them have kept themselves in good shape and we’ve a lot of boys who play Gaelic football and hurling and seem to have a great hunger and determination to do well and they bring that ethos into the whole squad.

“We haven’t played in six or seven month – Carrick are an Irish Premiership team.

“We know that, even if we were in normal times and playing on a regular basis, the sides will always have the edge on us in term of fitness.

“It is going to be tough, especially after being out for so long, but our players are in good spirit and they aren’t ones for lying down and getting their bellies tickled.

“They’ll go out and give it their best shot.”

Fellow West Belfast side St James’ Swifts received a bye to the second round after their opponents, H&W Welders, withdrew from the competition.