Boxing: Farrell and Murphy set for the ‘Battle of Belfast’ 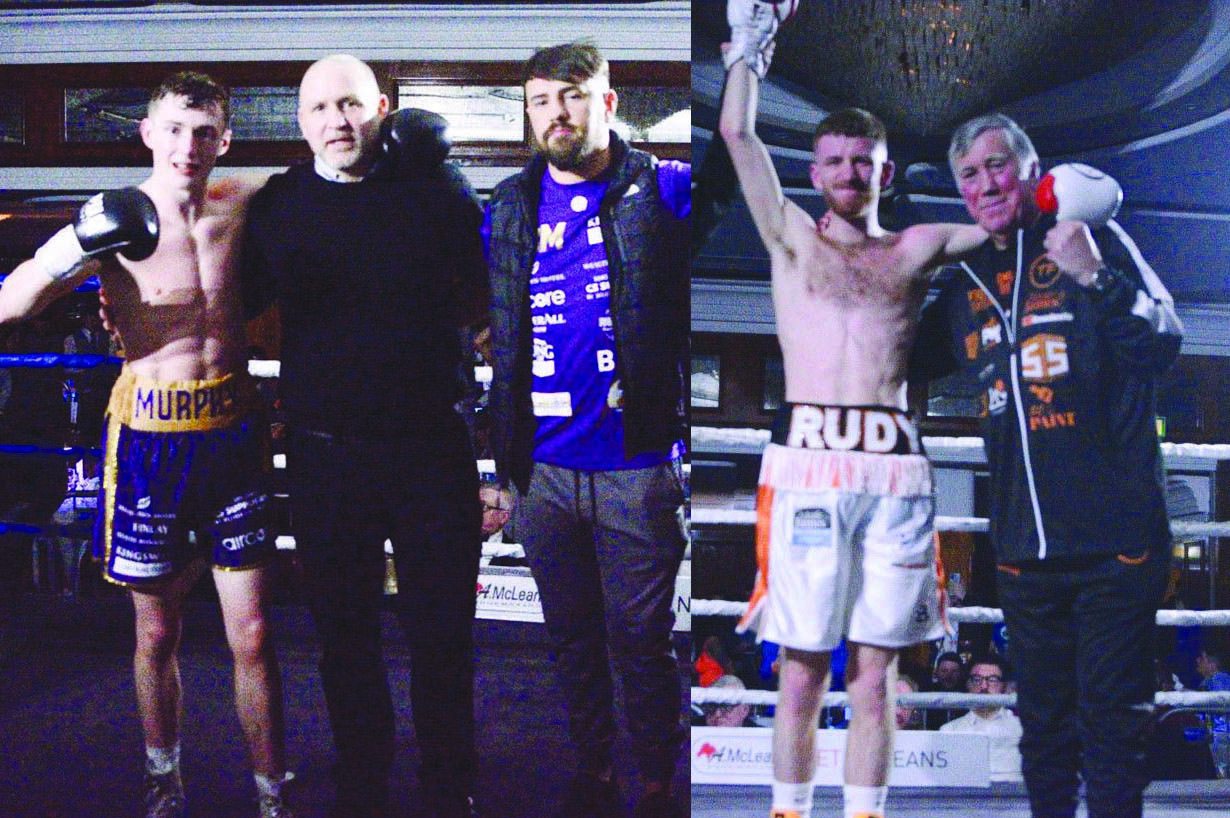 Colm Murphy (left, with manager Mark Dunlop and coach Dee Walsh) and Ruadhan Farrell (right, with coach John Breen) will meet for the BUI Celtic super-featherweight title at the SSE Arena next Saturday on the undercard of Michael Conlan v Miguel Marriaga

THERE appears to be several early contenders for fight of the night at the SSE Arena on Saturday, but the BUI Celtic super-featherweight title clash between Colm Murphy and Ruadhan Farrell, dubbed ‘Battle of Belfast’, may just lead the way.

All-Irish derbies will create an added buzz, but a cross-city showdown between two unbeaten prospects with a first title on the line adds even greater spice.

Add in the sub-plot of Murphy being trained by 2021 ‘Coach of the Year’ Dee Walsh against Farrell’s mentor, the vastly experienced John Breen, and there is all the ingredients for a fascinating battle.

South Belfast’s Murphy has won four from four as a pro and will be a big favourite against New Lodge’s Farrell, whose career has taken a little time to get off the ground with his debut finally taking place earlier this year at the fifth time of asking, perfect through three.

There is respect between the pair, but both are equally as confident.

“I think I carry the power and that will be a big factor in this fight,” said 22-year-old Farrell whose career has finally gained momentum with his three wins in as many months the first action he had  since switching from the semi-pro circuit in 2018.

“All-out war is what I’m training for.”

Murphy has been quick to counter, insisting he will have the x-factor on the night and has questioned ‘Rudy’s’ claims.

“I don’t think he will be able to hang with me in that regard because back when we were 15, I was the one who carried the power,” he stressed.

“There’s nothing to back up that he even has power climbing up through the senior rankings.”

‘Posh Boy’ is alluding to a couple of meetings between the pair when they were amateurs, but those battles in their mid-teens are some time ago and there is much water under the bridge for both since.

Murphy is a former Irish U22 amateur champion, but twice lost out in Ulster Elite finals to JP Hale, yet has experience of the big occasion and has been very impressive in his pro career so far.

He has shown the ability to box or brawl, carries decent pop in his punches and has an excellent engine with all four pro contests over six rounds, so the step-up to eight on Saturday ought to suit him.

“Fair play to Ruadhan and all the resilience he’s shown, but I honestly think my journey has been far tougher,” he insists.

“I’ve had far tougher opponents, longer rounds and I’ve put in a lot more work over the years.

“I really don’t think he’s had it hard yet. Look at my fight against Brayan Mairena - that was everything you wanted and I don’t think that’s a fight Ruadhan would step up to.

“I think in all departments I beat him: fitness, strength, power. He’s never fought a six-rounder and if this was a six-round fight I’d still stop him.”

The defeats as an amateur may suggest that Murphy holds the upper hand between the pair, but Farrell says the chance to redress the balance has provided an extra spring in his step and he is ready to put one over on his old rival.

He acknowledges that he will walk to the ring as an outsider, but appears to be revelling in that role and will be absolutely ready for battle once the opening bell goes as victory will open the door to opportunities that couldn’t have seemed further away when his career looked like it would never get off the ground.

“It gives me a bit of extra motivation to work harder in the gym and run harder on the roads,” he confirmed.

“I think it’s my time to shine on the big stage. On the night of the fight, the best man wins and I know I will work hard enough to steal the opportunity to move onto bigger and better things. If I win, I’m going for the Irish title next.

“He’s the favourite. Everyone is saying is and I’ve said it myself, but that’s just more motivation.

“I leave all my talking to the ring, so we’ll see on August 6. I know this will be a fight-of-the-year contender and an all-out war, but I don’t believe Colm Murphy stops me.”