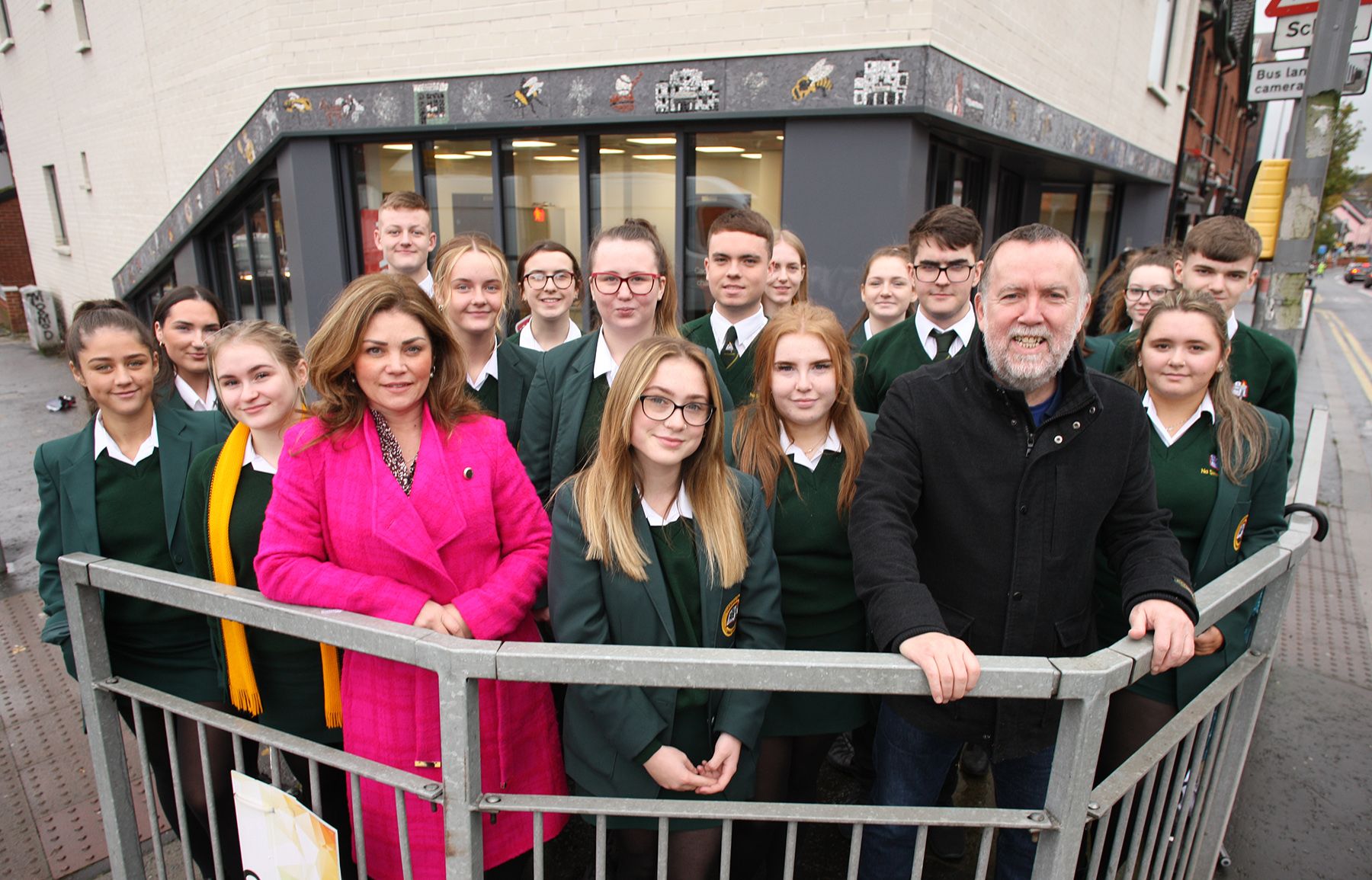 COLÁISTE Feirste pupils have been commended for designing a beautiful mosaic that adorns the striking new Áras na bhFál building in the Gaeltacht Quarter.

The artwork – which incorporates much of our local culture and landmarks – was installed without the deserved fanfare due to the onset of the Covid-19 pandemic.

This week, the students behind the mosaic showcased their work including their early preparatory artworks that are on display in an upstairs gallery at An Chultúrlann.

Their mosaic takes pride of place outside of Áras na bhFál, which is home to several Irish language organisations including Iontaobhas na Gaelscolaíochta – the trust fund for Irish medium education.

Commenting on the work, Iontaobhas na Gaelscolaíochta Director, Pilib Ó Ruanaí, said: "The mosaic came about because we were looking to tell a story, and to let the building tell a story, because it was designed as another part of the Gaeltacht Quarter.

"Architects tend not to like signage or things like that on their buildings, but from our point of view there had to be because we want to promote the language. We wanted the building to tell the story of the Gaeltacht Quarter, and who better to tell it than the children who are being educated in Irish, who are from the area, and are able to reflect their own experiences."

Coláiste Feirste art teacher, Róisín Nic Giolla Bhríde, said: "We were very honoured to be chosen to take part in this project,

"We considered a few different mediums, so we considered clay and metalwork – something that was going to be durable – and then we looked at mosaic, and we felt that it would last for a lot of years to come.

"We tried to incorporate the different aspects of the area into the design. We looked at old jobs and old buildings, because we wanted to include the older generation so they can come along and look at all the memories that they had. We also looked at the industry of the time.

"There used to be a farm where St Mary's (University College) is, and they kept bees, so you'll see a lot of bees featured.

"Then we brought in the kids' interests and their culture, which adds a modern aspect to it. You'll see Irish dancing, Gaelic football, the instruments the kids play.

"We're greatly honoured to be a part of it and it's great that they'll be able to see this when they're older and show it to their children too."