Allianz Hurling League: O'Brien's penalty save denies Antrim a share of the spoils against Waterford 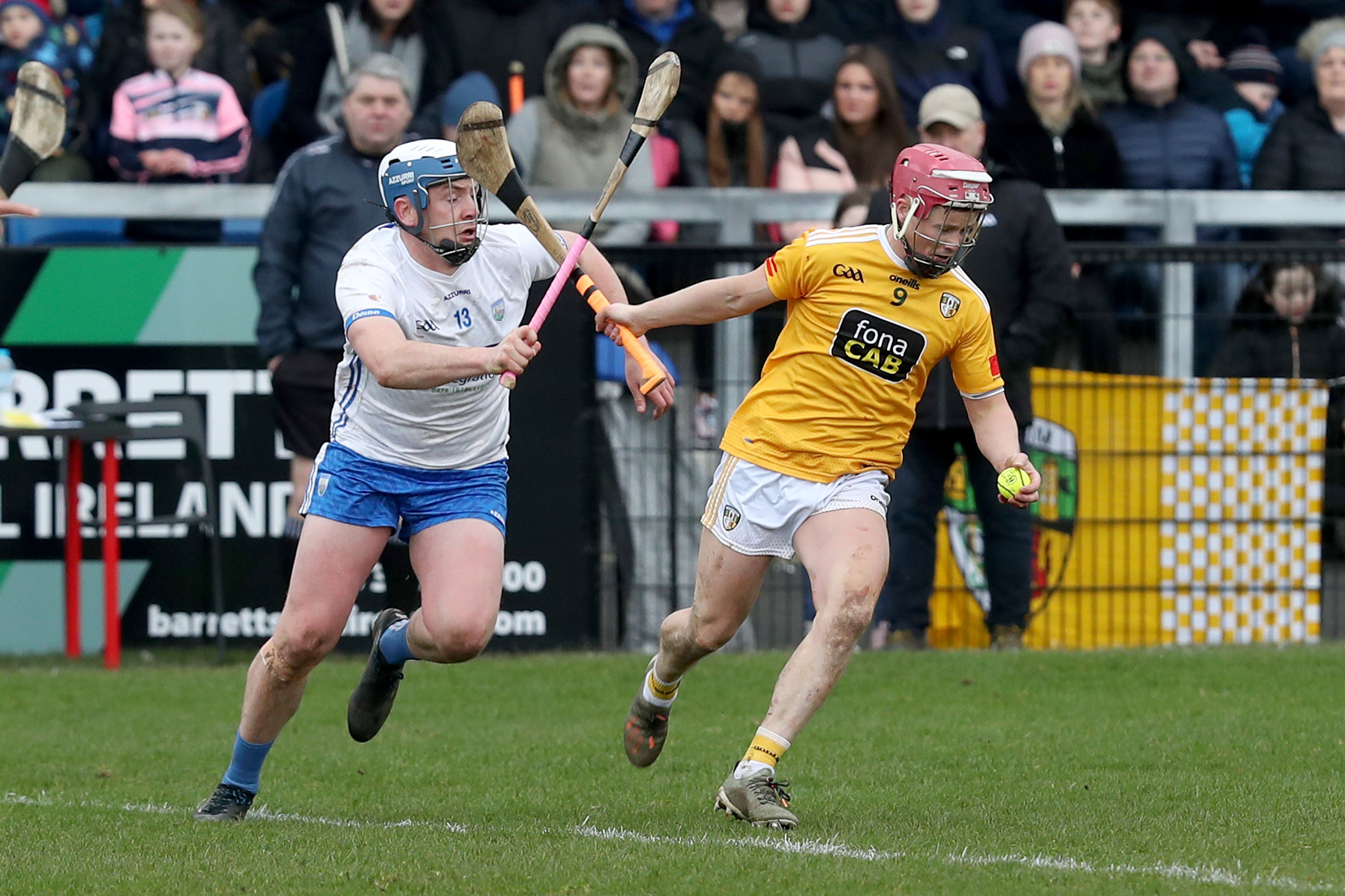 IT was another what might have been for Antrim's hurlers as they came oh so close to snatching a draw against 14-man Waterford at Corrigan Park on Sunday, only for Neil McManus' last-gasp penalty to be tipped over the bar by Shaun O'Brien.

This was the final act of a thrilling Division One game that had everything with the Decies playing over half with Colin Dunford sent-off having previously bagged 2-1, but despite the numerical disadvantage, Waterford found the answers in the second period to overturn a four-point half-time deficit.

Austin Gleeson was in inspired form in the second period, landing some scores that were worth the entry fee alone and the Mount Sion man took this game on his shoulders when Waterford needed a leader.

McManus finished the game with 13 points to his name, but the last was the unlucky one with O'Brien's save denying the equalising goal that would have secured a share of the spoils - a cruel end for the Cushendall man who had put in a mega shift all day.

However, there is no such thing as fair in top-level huling and while Antrim again proved they are a match for the big boys, they were left without anything to show for it.

"The game was lost long before the last strike of the game," said manager Darren Gleeson who identified errors that led to Waterford's first and third goals.

"We had a ball in the half-forward line that looked like a score (opportunity), hit five passes and the last one was cut out; they come up the field and the ball is put in the net.

"We lost some of our discipline there towards the end, (penalised with) some questionable frees there I may say. Then a short ball being played out, hit straight to a Waterford man and it ends up in the back of the net.

"You can't make those mistakes at this level. last week (against Dublin) it was basic mistakes as that cost us two goals and 11 points - 13 scores in a game. Today, going on my own memory there were basic errors that led to scores again.

"We put up a nice score, but you have to remember that Waterford went down to 14 men, elements again were a big thing. There was a big breeze there - who would cope best and Waterford did there, so they are probably deserving coming out with the result."

Playing with significant wind advantage, Antrim were much quicker to settle with McManus landing points either side of efforts from Keelan Molloy and Daniel McKernan, but the hosts had goalkeeper Ryan Elliott to thank for diverting Stephen Bennett's rasping shot up and over for a point.

The Dunloy man was unable to do anything on nine minutes when Colin Dunford was picked out b DJ Foran in the corner and the Colligan man rounded Stephen Rooney to slot home on the angle and give the visitors a 1-2 to 0-4 lead.

Antrim responded brilliantly with four of the next five scores including a missile from Gerard Walsh deep in his own half and the route one approach would pay off on 14 minutes as a long ball squirted free with Keelan Molloy playing back to Domhnall Nugent who bulldozed forward and applied the finish to the net.

Waterford would hit 10 wides in the first half with the wind playing havoc but Antrim were much more economical and had moved six clear when first, Tom Barron pointed and then on 29 minutes, Dunford would be first to a dropping ball to fire through a ruck of players and find the net to reduce the gap to two.

However, he would then blot his copybook when referee Thomas Gleeson gave him his marching orders for what appeared an off-the-ball swipe at Nugent and with McManus continuing to knock over frees to bring his first-half tally to eight points in all, Antrim led 1-14 to 2-7 at the break.

Waterford made much the better start to the second period and after hitting two of the first three points, struck for goal when Stephen Bennett read Gerard Walsh's attempted short pass to intercept and find Michael Kiely who blasted home to level.

By the midway point of the second period, they had pushed on and led by five with Gleeson leading the way as Antrim looked like their challenge was fading, but the hosts rallied with fine scores from Molloy and Bradley keeping them in touch.

Bennett and Gleeson continued to maintain a gap for Liam Cahill's men, but it was game-on again on 62 minutes when Ciaran Clarke rattled the net after pouncing on a break from a tight angle and a Cunning point left just one in it.

However, Waterford were able to find the answers with three Gleeson points leaving a goal in it until Antrim were given a penalty deep in injury-time after Conor McCann was taken down when about to finish to the net after O'Brien had saved from David Kearney.

McManus stepped-up and went high, but O'Brien got the vital touch to keep the ball out of the net and ensure the points were heading back to the south east.

"It's a really difficult place to come to and we were well aware of that," said Waterford manager Liam Cahill after.

"Antrim performed really aggressively on their home patch and it was a really difficult game for us to get a handle on so we're just glad to get back down the road with two points.

"We knew we'd get a draw anyway (if McManus' penalty went in) and a point going down the road, but we could just never really put them away.

"Down to 14 men really tells you what you have and we're encouraged by the way the boys reacted with the work rate and honesty in the second half to get the result."

Antrim will be disappointed they didn't make more of their numerical advantage.

In the third quarter, the imbalance wasn't apparent as they struggled to snuff out Waterford attacks and it is an issue that will be addressed this week ahead of next Sunday's massive trip to Laois that will likely decide survival in Division One or a relegation playoff against the bottom team in Group A.

"When we review it we'll know for sure, but my first thoughts were the work rate dropped, we had an extra man and instead of 13 guys marking and leaving one free, we didn't seem to do that and Waterford seemed to get more space, so we'll have to address those things," Gleeson reflected.

"We talk about it on the training field that when a man gets put off - either for or against - we have a plan in place. It didn't come off for us and now we have a massive game next week."