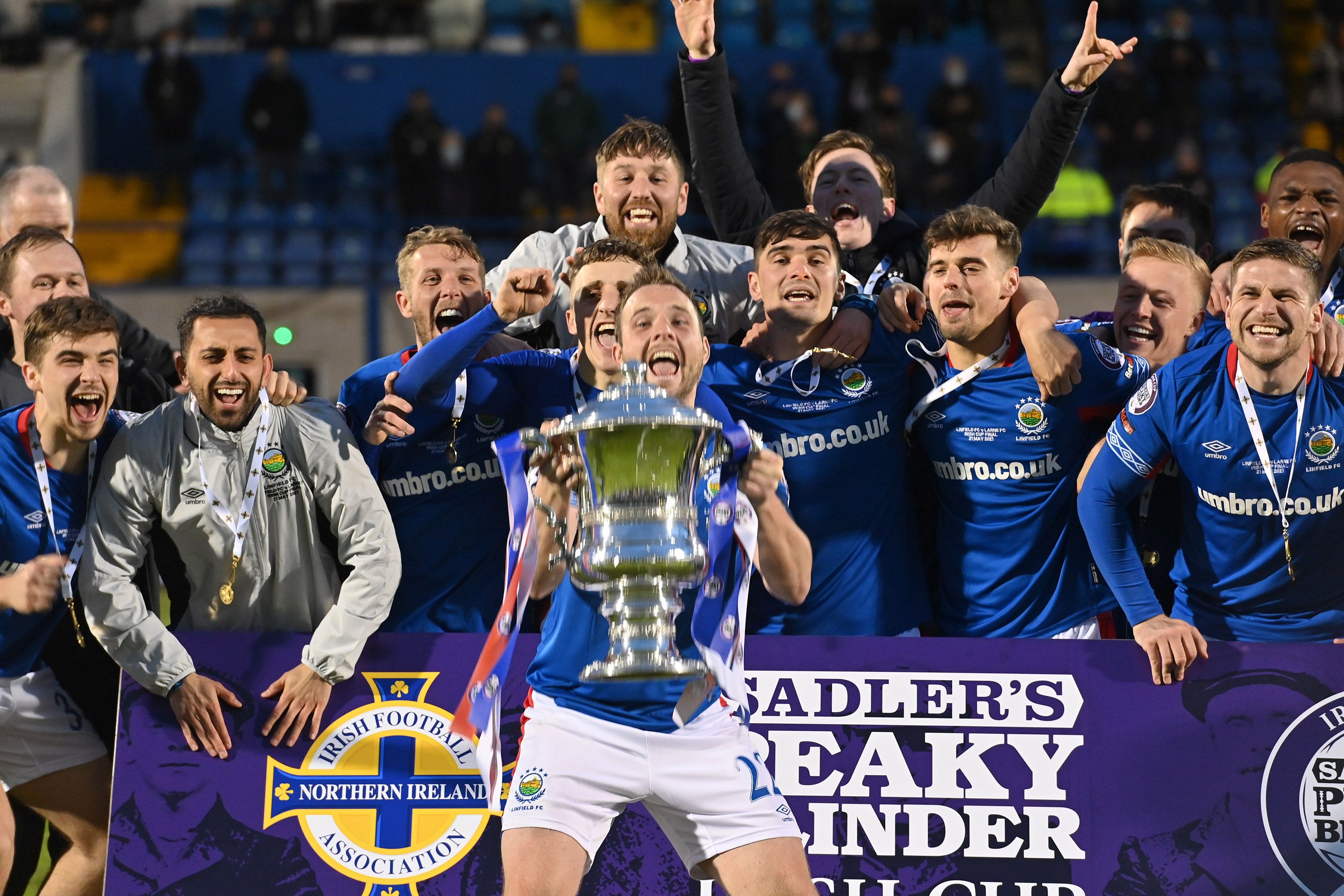 FIRST-HALF goals from Shayne Lavery and Joel Cooper built the foundations as Linfield kept their double aspirations alive by claiming the Irish Cup for the 44th time at Mourneview Park on Friday.

Jeff Hughes did strike late for the Inver men in stoppage time but it was too-little, too-late in a game in which Linfield were worthy winners.

David Healy's side were on the front foot from the off and got their reward with Lavery finding the net five minutes in and when Cooper doubled their lead it seemed it would be an easy night's work.

Larne had fleeting moments and went close on occasion to getting back into the game, but their goal came too late to make a game of it as the South Belfast club kept their hopes of a double on track.

It was a reverse of the 2-1 win for Larne last weekend that put the league champaign on ice for Linfield at the weekend, but The Blues were emphatic in their response.

"I thought we were outstanding tonight," manager David Healy told the BBC after.

"We started the game in the manner in which we wanted to finish the game.

"Larne is an outstanding club. They have been immense this year and deserves their shot at the final tonight.

Linfield made a blistering start and almost found themselves ahead in the fourth minute when Shayne Lavery did well the cut the ball back to Cameron Palmer, but Conor Mitchell made a great save to get the ball up and over for a corner.

They didn't have long to wait for the goal as the initial delivery resulted in a second corner and from this, Lavery peeled away to turn Niall Quinn's delivery home.

Larne gradually settled after being stunned early and had a penalty appeal waved away when Ronan Hale went down under a Mark Haughey challenge.

Hale then had an opening when latching onto a ball clipped in by Martin Donnelly, but Conor Pepper made a good challenge to get the ball out from a corner.

The delivery was nodded out for another by Quinn and from the second, Jeff Hughes got his head to Donnelly's cross but there was nobody there to turn it into the net at the back post.

But it was Linfield who were that much more clinical and they doubled their lead on 32 minutes as Quinn made an excellent intercept on the right sideline, played the overlapping Conor Pepper down the line who sent a low, inviting ball across the face of goal with Joel Cooper bursting in to squeeze it under Mitchell.

The pressure didn't relent after the break at Linfield went in search of a third with Cooper's head flashing narrowly wide from a corner, but Larne suddenly sprung to life and went so close the the goal they needed within the 54th minute.

First, David McDaid was thwarted with a top save by Chris Johns who got a strong hand to divert the shot up and over; the resulting corner breaking to Fuad Sule at the edge of the box who thundered a short off the top of the bar and over.

This was as good as it got for the Inver Park side as Linfield weathered the mini storm and almost had a third when Shayne Lavery looked through, only to be denied a strike at goal by a fine challenge by Josh Robinson.

The Blues had another chance to seal it with 10 to go as Cooper beat Albert Watson, but not Mitchell who saved.

Larne pushed late with Jeff Hughes seeing a good strike diverted over for a corner from Jimmy Callagher, but they eventually did get their reward two minutes into stoppage time when Hughes found the net after it broke when Sule's initial shot was blocked.

There was no time for Larne to push for a dramatic equaliser, however, as Linfield claimed the Irish Cup for the 44th time.

"I'm immensely proud of the players (in) the way they approached it tonight," added Healy.

"How they approached the game, managed the game and ultimately won the game...

"We played the semi-final on Tuesday and we had to recover, assess, if the Cup final was going ahead (after the Crusaders protest) but I think we were prepared and tonight we got the right formation, the right players and the right result."