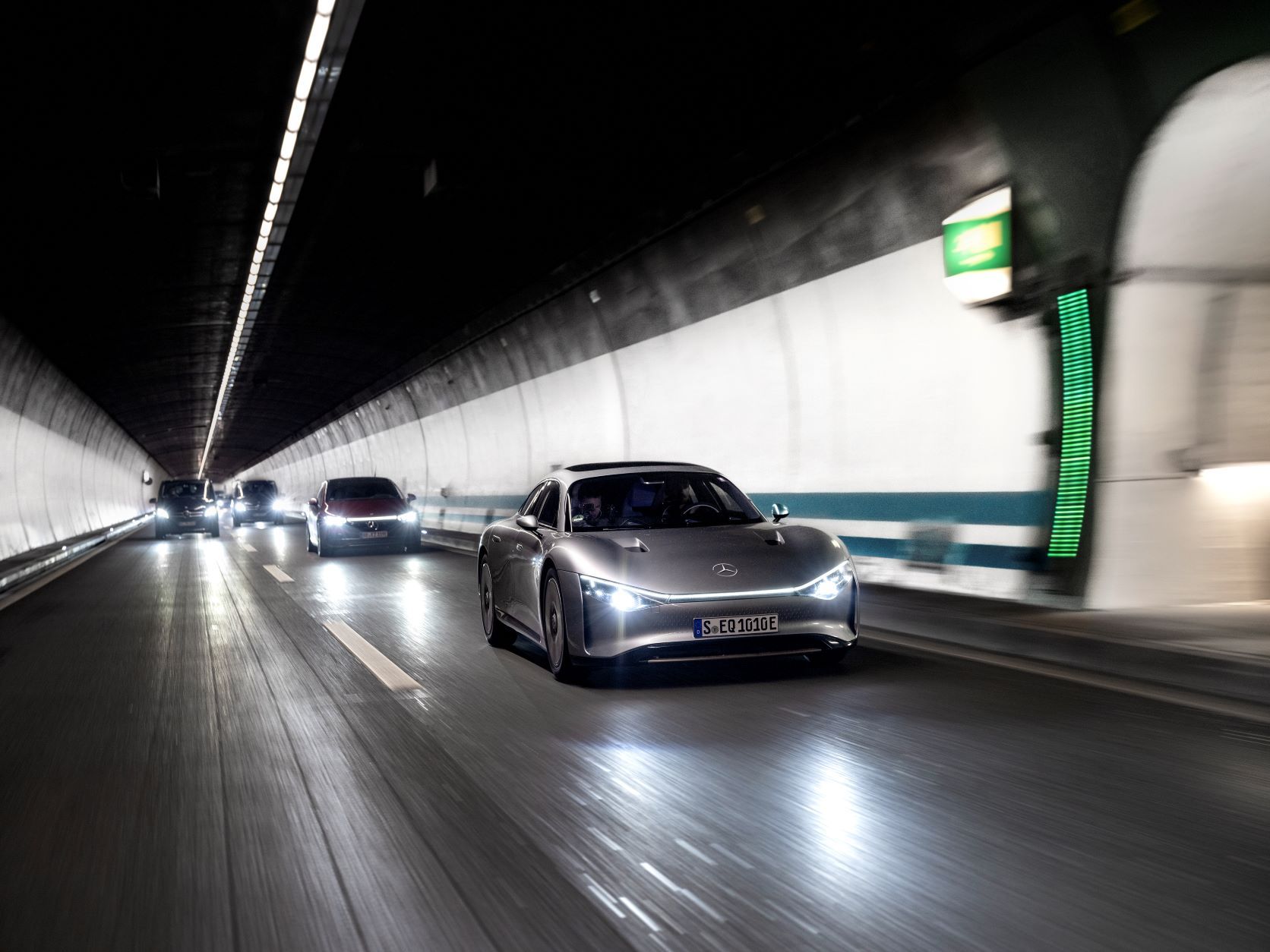 MARATHON TRIAL: The Meredes electric on its 620-mile one-charge journey

ONE of the factors that stops many buyers from considering an electric vehicle (EV) is all too often the driving range available on a single charge.

Many potential buyers have said that if this one feature of EV design could be improved they may very well be tempted to purchase an EV when next changing their car. Perhaps that day is much closer than any of us could have expected.

Mercedes Benz set out recently to test their latest EV technology featured on the VISION EQXX EV, and boy did it deliver on range and efficiency. Travelling from Sindelfingen near Stuttgart in southern Germany, they crossed the Swiss Alps and travelled through northern Italy to Cassis in the Côte d'Azur in southern France, it effortlessly covered more than 620 miles through both everyday traffic and open roads on a single battery charge. The journey started in cold and rainy conditions in Sindelfingen with the car driving at regular road speeds, including prolonged fast lane cruising up to 87mph on the German autobahns. On arrival in Cassis, the batteries still had around 15 per cent power, which could have delivered another 86 miles. That gives it a potential real-world range of more than 700 miles.

The long-distance drive was completed with the charging socket sealed and accompanied by an independent expert from certification body TÜV Süd. Mercedes have now taken electric vehicle efficiency to a whole new level in real-life conditions and with independent proof.

This officially confirms the effectiveness of the new Mercedes Benz development approach, they think holistically about efficiency from the drivetrain to aerodynamics and beyond, right down to the tiniest detail. This new blueprint for EV engineering has genuinely delivered a brand-new benchmark and the technology in the VISION EQXX will be deployed in upcoming series-production Mercedes.

Mercedes have just launched the EQS SUV, which delivers up to 410 miles range. The SUV is a battery-powered alternative to its existing, the Range Rover-rivalling GLS. An all-wheel-drive 4MATIC version is also offered, with the same 355bhp output from a pair of electric motors. Range on the 4X4 is understandably a bit less at 380 miles on a full charge – that’s Belfast to Cork and back to Dublin, not bad for an electric SUV. Four-wheel steering is fitted as standard, giving greater agility and a tighter turning circle at low speeds and improving stability in high-speed corners.

WHEN I set out to write this article, no-one in the rally world wanted to accept that the organisers of the Circuit of Ireland had messed up badly.

Firstly, that was by incorrectly applying a “bogey” rule, retrospectively removing it, changing competitors times and costing the leader the win. When I asked for comment, no-one wanted to know, but now those same people are queuing up to criticise.

The bogey rule is a safety strategy that sets a fastest time over which a driver is not allowed to go without incurring a penalty.

It was unfortunate that the mistakes were made, because it took the shine off what was an amazing drive by Alastair Fisher and Gordon Noble to win the rally. Overnight rally leader Desi Henry was in superb form on Friday, setting fastest times and completely at home on the fast-flowing stages through the Glens of Antrim. But he suffered mechanical problems on Saturday, resulting in his retirement.

Second place Callum Devine also succumbed to mechanical woes, but he was able to continue. Welshman Meirion Evans retired after ripping a wheel off his VW on stage nine, with Carryduff’s Jonny Greer inheriting his fourth position. Henry and Devine’s mechanical woes left Josh Moffett and Alastair Fisher at the front fighting for the victory, with Moffett 0.2 seconds in front going into the final stage.

But, just before the final stage, the organisers made that astonishing decision, and it dictated the outcome of the event. Moffett and Fisher beat the bogey time on the final stage and had the rule reversal not happened Moffett would have won the rally. As it was, another fastest time for Fisher coupled with the rule change meant he won. Moffett was understandably gutted by the course of events.

How could such an experienced team mess up so badly? I asked the PRO of the event for a comment he said that bogey times are not used on international rallies. When I asked him why the organisers used them up to final service, he never got back to me.

I asked the tarmac rally championship PRO the same question and was told it was something to do with the FIA. Whatever the reason, it devalued a fabulous Fisher victory. Well done, Alastair and Gordon.

Changing rules with only one stage left out of eleven doesn’t send out a good message to competitors, spectators, or sponsors. For the record, Callum Devine was third, Jonny Greer fourth, fifth was Daniel McKenna, sixth Derek McGarrity.

On a positive note, top Mk2 Escort competitor Wesley Patterson from Lisburn – who broke his back in the Galway Rally in January – is improving and will have his supports removed this week. Best wishes from everyone in GMR and the Motorman Column. Get well soon, Wesley.

AFTER winning the Saturday sprint race, Max Verstappen made it an Imola double in a Red Bull – claiming a dramatic Emilia Romagna Grand Prix victory on Sunday in far from perfect conditions. He was followed home by his teammate Sergio Perez.

Ferrari failed to delight the Italian Tifosi on home ground, though, with championship leader Charles Leclerc finishing sixth and his teammate Carlos Sainz crashing out on the first lap.
Having won pole position in Saturday’s sprint race, Verstappen led off the line with Pérez in hot pursuit. The safety car was dispatched almost immediately, though, as McLaren’s Daniel Ricciardo sent Sainz into the gravel and out of the race, his second failure to finish in a row.

Leclerc pitted for soft tyres on Lap 54 in pursuit of Pérez, but the championship leader spun, hit the wall and was forced to pit for a new front nose and tyres, dropping back to ninth in the process. He did well to recover to sixth by the finish.

McLaren’s Norris took the final podium place and Mercedes’ George Russell took a fabulous fourth – his teammate Hamilton languishing in 13th and, to add insult to injury, being lapped by leader Verstappen.

Leclerc still leads the championship with 86 points, Verstappen is now second on 59, and Pérez third with 54.

• In World Superbikes, Larne rider Jonathan Rea took two victories at the Assen race circuit in the Netherlands that took him past the magic 100 wins. In the second race he clashed with current World Champion Toprak Razgatlioglu, resulting in both riders crashing out. Rea is now seconnd in the world championship, 18 points behind leader Spaniard Alvaro Bautista.